I woke up the day of our big appointment full of excitement, but also full of disbelief that we were actually going to do this.  Today.  Like, for real.  At the same time, I was hesitant to let myself get too excited, so I brushed off those feelings and tried to just focus on getting ready for our big trip.

I had been pretty calm, cool and collected (maybe my wife’s personality is rubbing off on me) for the past couple of days, and my current excitement was definitely at odds with my desire to be calm and level-headed about the whole thing.  Over the past few days I had received so many well wishes and questions about how I was doing, and I was never really sure how to respond.  I suppose most people would have expected me to be incredibly excited, but I was feeling more reserved and almost apprehensive about the situation because the outcome was so variable.  Believe it or not, IUI only has about a 20% chance of working the first try (which is about the same success rate as the old fashioned way), which to me meant that there was an 80% chance that it wouldn’t work.  I saw this appointment as yet another stepping stone in our journey.  A stepping stone that could easily disappear or just continue to move further and further away, if things didn’t go according to our plan.

I know, I’m a big downer.  But if you prepare for the worst, then nothing can disappoint you, right?

We jumped into the car and got my last coffee from Starbucks (a delicious latte with almond milk!) and made the familiar 2 hour trip to Saskatoon.  My feelings cycled between nervousness and excitement during the whole trip, as I tried to wrap my mind around what was happening.  I could tell my wife was also excited and nervous, because she was acting just a bit sillier than normal.  Upon arrival at the clinic, we paid our $350 clinic fee (cha ching!) and our $100 storage/admin fee (cha ching!) and sat in the waiting room.  The nurse let us know that our sperm was being thawed, which would take about half an hour, and that we would be taken into the office shortly.  Tired from my erratic feelings, I rested my head on my wife’s shoulder and watched some TV while we waited.

As I was just getting into “The View”, the woman sitting next to us in the waiting room started talking to us.  She was very pleasant, about our age, and just casually offered us her brother’s sperm.  Yep, you read that right.

Seriously.  I could not make this stuff up.

We were initially a little taken aback (you know, with her being a complete stranger and all), but to be fair, it’s not the first time that we have received an offer like that.  When some of our male friends found out we were trying, we got offered sperm by the bucketful (usually as a joke, but not all the time).  But we’ve never received an offer from someone we didn’t even know!  She was very friendly (if clearly a little nosey) and also prefaced her offer by saying she could just mind her own business, if we found her request insulting in some way.  We just chuckled, thanked her sincerely for her offer and let her know we had already picked a donor.  We continued a bit of polite conversation and my wife mused on how that conversation with her brother might go.

Some people may have found this offer offensive, but I actually found it rather encouraging.  I’m sure it took a lot of courage for her to even strike up a conversation with us, let alone make the offer that she did.  So to us, a total stranger offering to help us (a clearly gay couple) start a family was a beautiful sign of support and compassion.  It really warmed my ovaries to see such a genuine gesture from a complete stranger.

We were called into the office by a nurse, who instructed me to take off my clothes from the waist down and lay on the table.  As I was getting ready, my anxiety and excitement came flooding through my calm and collected barricade and everything started to feel very real .  What if this actually works?!  What if it doesn’t work?

The nurse came back into the room and started up the pleasant type of conversation that medical professionals start when they are about to touch you in a very private area.  She was asking us about our jobs, as she told me to scooch my butt to the edge of the bed and put my legs up into the stirrups (a la Pap test, for those familiar with that lovely procedure).  She continued making small talk as she drew the sperm sample up into a pipette with a long cannula (thin tube) attached to it.  She warmed the speculum under the tap, lubed it up and let me know she was going to insert it.  Seeing my discomfort, my wife came to my side and put her hand on my shoulder.  I heard the familiar clicking of the speculum as she expanded it to access my cervix.  She then inserted the cannula into my uterus, squeezed in the sperm, removed the speculum and we were done.

That’s it?!  We drove 2 hours for that?!  As my sister-in-law so eloquently put it, “What were you expecting?  Streamers!?”

The nurse told me to lay flat for 15 minutes, then I could put my clothes on and we were free to go.  Our fertility doctor popped in a couple of minutes later and let us know that the thaw went well, there were 40 million sperm in the sample and that everything looked great.  It was hard to believe there were 40 million of those little swimmers, just paddling their way through my uterus.  Surely that would be enough.  While we waited, my wife and I debated whether we should have a little nookie.  We had heard anecdotally that orgasm can really help draw the sperm up into the uterus and fallopian tubes, and we wanted to increase our chances of conceiving as much as possible.  It appears that the research is split on whether it actually increases pregnancy rates or not, but it can’t hurt, right?  Anyway, I was far too shy, so unfortunately you guys won’t get to hear the titillating details of a medical office romp.  According to this interesting article, there is a little bit of research to support higher sperm retention and motility towards the ovary following female orgasm.  If there is a next time, we may have to give it a try…for scientific purposes of course.

I was given a requisition for blood work to check my hCG levels two weeks from that day.  The lab would deliver the results that same day to the clinic, and the clinic would then call me with some very good news or some very disappointing news.  If it was good news, then I would go for one more blood test 2-4 days after, just to ensure hCG levels were progressing normally.  And if it was the news I was dreading, I would just call them on day 1 of my cycle and start this whole process all over again.

I put my clothes back on and waddled my way carefully out of the clinic down to the car.  I know it’s silly, but I really felt like the sperm were going to fall right out!  We spent good money on those babies, so I wasn’t about to let them get away!  I spent the next few hours moving cautiously, raising my hips when I could and crossing my legs with much more force than was necessary.  My wife just laughed at me, and rightly so, I’m sure I looked ridiculous.  When we got home, we relaxed in bed (with my hips up on a pillow, of course) and cheered on my left ovary to do it’s thing.

Over the next few days, I was hyper-aware of anything going on “down there”.  Any little flutter in my lower abdomen or tiny cramp convinced me that it was the beginnings of a baby…until I realized it was actually just gas.  I knew that it was too early for anything to really be happening, but my anticipation really got the better of me.  I was torn between wanting this so badly, and knowing that it probably wasn’t going to work the first round.

The next step was just to wait.  We had to wait 14 long, grueling days until we could find out if we had made a baby or not.  We’re pretty good at waiting by now, but it felt like there was a constant battle between my mind and my heart, optimism and negativity, hope and reality.  During the next couple of weeks, I found myself frequently putting my hands on my lower belly and just sending as much love as I could to everything that was going on down there, hoping that it would be enough. 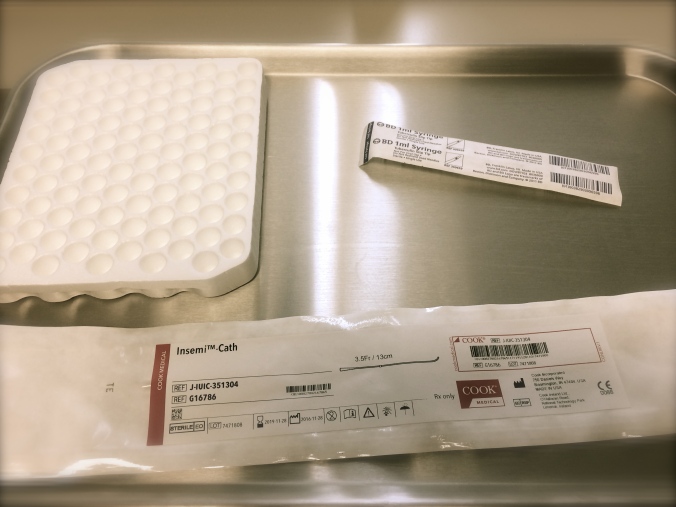 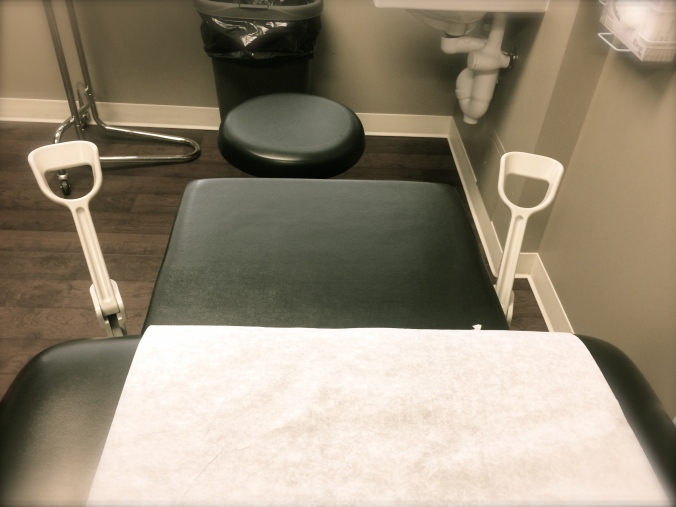