I apologize for the radio silence over the last couple of months, but we’ve been dealing with A LOT.  I’ve missed you all.  Let’s start at the beginning shall we?

After my last negative pregnancy result, a lot was riding on our third attempt at IUI.  Not only that, but I had moved to Winnipeg (#militarylife) to be with my wife while she learns to fly helicopters (#mywifeisbetterthanyours).  So now I was 778 km away from my fertility clinic.  Yikes.

I got my period like clockwork shortly after my negative result.  I informed the fertility clinic and hoped they could get me an ultrasound in Winnipeg to save me a long drive back to Saskatchewan.  Unfortunately, the fertility clinic in Winnipeg was absolutely no help (not to mention they have a nine month wait list!).  The closest ultrasound they could get me was in Yorkton, SK.

On day 13 of my cycle, I got into my car and drove 5 hours to the bustling metropolis of Yorkton and had my 10 minute ultrasound.  Now, I had a decision to make: head back to Winnipeg, with a chance I may have to be in Saskatoon the next day for the IUI procedure, OR continue on to Saskatoon and hope that my body’s cycle would be as consistent as it was last cycle.  So armed with hours of podcasts, off to Saskatoon I went.

About an hour outside of Saskatoon, the clinic called me with the results of my ultrasound.  I barely breathed as I listened to the results.  The good news was that I had two eggs developing!  Woo hoo!  I had somehow transformed into a fertility goddess!  Practically a medical marvel!  The bad news was that the eggs weren’t quite ready to go, and my IUI was scheduled for three days from then.  Sigh.  After almost 8 hours on the road, I did a big ol’ U-turn and headed back from whence I came.

Aside from driving for 16 hours, the IUI went off without a hitch later that week.  I meditated for 10 minutes right after and relaxed, with my feet in the air, for about an hour in my hotel before heading back home to Winnipeg.

I just kept thinking, “third times a charm”.  C’mon body, you got this.  And, if I had two eggs ready to go, how could this not be my chance?

The two week wait, seemed better than the other ones.  It could have been the acupuncture, meditation or maybe just that I was used to the anxiety and knew that increasing stress levels never really helped much.  My wife’s tendency to not worry so much about things you have no control over seems to be wearing off on me.  I was also very unemployed after our recent move, so I was able to rest as much as I wanted and take time for myself.

A couple days before I was due for my pregnancy blood work, I felt the familiar itch to take a pregnancy test.  I had done a pretty good job keeping my anxiety at bay.  I had an extra test from my previous attempts, so I grabbed a cup and headed to the bathroom.  I did the dip and then laid the test on the counter to wait.  I swear time stands completely still as soon as that stick comes in contact with urine.  When I didn’t see that second little line appear instantly I just walked away.

Screw this.  It’s negative again, isn’t it?  Just like last time.  Whatever.  It’s fine.  We’ll try again.  We can still adopt.  I’m infertile. Broken.  I shouldn’t have even checked.

My mind was a whirlwind of negativity and fear.  I had watched so many negative pregnancy tests, turning them to see the result window at different angles, in a different light.  My desire was so strong I felt I would will that little line to appear, but it never did.

I went to the kitchen to do something that I don’t remember.  A couple minutes later, I walked back into the bathroom.  As quickly as I had dismissed the initial results, I felt the urge to know for sure.  The familiar feeling of hopefulness and potential that comes from being at the top of that fertility roller coaster overcame me.

And there was that second line.

It was clear as day.  Vibrantly blue against the white background of the test window.

I was pregnant again.

I mean, I was all of those things, but I also wasn’t at the same time.  I was also scared.  I was nervous and anxious and unsure.  I had been here before.  And it all disappeared in the blink of an eye.  A positive pregnancy test to most people means a baby in nine months.  To me, it meant the beginning of a fragile journey where a happy ending was not always the outcome.

A few days later blood work confirmed I was pregnant and that my hCG levels were rising properly.  I breathed the tiniest breath of relief.  As soon as I confirmed the blood work I set out on my mission to get a midwife.  Even though it felt too early, it’s been my dream to have midwifery care and by-gosh I was going to get it.

I actually was accepted into a midwife’s care in record time!  I called with my information and a day later a midwife was assigned to me.  I had to have some pregnancy karma stored up somewhere in the universe, right?

I was really excited to have a midwife and it made the pregnancy feel a little more real to me.  We had our first appointment at the birth centre in Winnipeg (which is goooorgeous).  Our midwife was warm and friendly and everything I hoped she would be.  We had a nice hour long consultation about health history and our journey thus far.  My wife was a champion and drove direct from her flight training in her flight suit (hot!) to be there for the appointment.  We found out I was due on June 8, 2018.  It felt so far away and so close at the same time.  The next step for me was to get an early ultrasound and hear that precious heartbeat.

Unfortunately, the health care system in Manitoba does not offer early ultrasounds unless there are extenuating circumstances or a need to date a pregnancy.  You’d think that a previous miscarriage would qualify as a reason for an early ultrasound, but nope.  I didn’t qualify.  My midwife offered to fudge things a bit and put me in for an ultrasound for “dating purposes” (even though I practically knew the exact moment of conception), but I might have to wait until I was around 10-12 weeks to get the ultrasound.

I wasn’t willing to wait that long.  I just couldn’t.  This pregnancy already felt so tenuous and delicate that I knew I would lose my mind waiting until almost the end of the first trimester to confirm.  So, back to Saskatoon I went for a 7 week ultrasound at my fertility clinic.

I laid down on the table and the doctor asked me how I was doing.  I said I was morning sick most of the time and very, very nervous.  Her face was kind with the understanding of my history.  In went the ultrasound wand and almost immediately my little baby popped into view on the screen.  My eyes welled up with tears as I heard the doctor measure her heart beat.  A smile spread across my face as the tracing of the 167 beats per minute flowed across the bottom of the monitor.  Baby was measuring perfectly and her heartbeat was strong and fast. 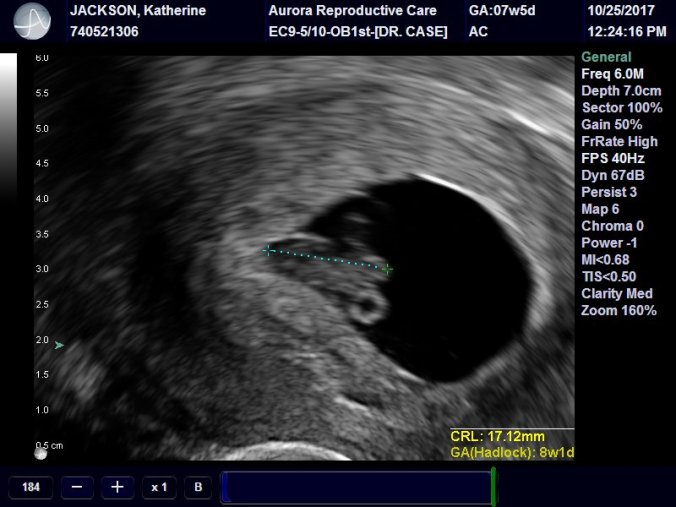 My relief was incredible, though not complete.  This was a huge milestone for us, but we still had a long road ahead.

As soon as I was dressed, I told my wife, family and close circle of friends who have supported me throughout my loss.  I felt so grateful, not only for the support of the amazing people around me, but also for the hope of starting our family.

The first trimester was a strange time for me.  It was a happy time, of course, but it was also tempered with worry and uncertainty.  Pregnancy after loss is a constant conflict of emotions.  I feel trapped between two worlds.  One world where I look forward to having a big belly and planning pre-natal classes and buying baby things.  Meanwhile the other world taunts me with loss and embarrassment and despair.  I want to be happy and hopeful and look to the future, but it’s challenging with the reality of the true miracle of life.  The reality that nothing is guaranteed.  The reality that life is so, so precious and it could be taken away in an instant.

I’m sure you were all hoping for a slightly happier blog, but apparently that’s just not how I roll.  I guess I’m not naive anymore.  Miscarriage steals the magic and the potential of pregnancy.  Every day does get easier.  As I type this, I am 15 weeks and 5 days pregnant, baby is the size of an avocado and I’m already showing off a little baby belly.

Every morning when I get out of bed I look at my belly in the mirror to see if it’s still there, how big it is, how round it is.  I ask my wife constantly if my boobs are still big, to make sure my body still knows that I have a baby on the way (also because they are ridiculously huge now, so it’s kind of funny).  I check baby’s heartbeat every week with a fetal doppler, just to make sure she’s still in there and doing okay.  Until the last little while, I have tried not to refer to myself as pregnant or talk about it too much, in case it all changes.  I add qualifiers to statements about my pregnancy like “as long as everything works out okay” or “we know anything could still happen”, just to save face in advance.  Just last week my wife sang to our baby and I felt like it was barely real.

I’m so happy to be pregnant.  I know how incredibly lucky I am.  I know so many moms and families would give anything to be in my position because I was once in their shoes.  I was the barren mom looking at pregnancy announcements on Facebook and feeling the sharp pang of jealousy.  We are joyful and hopeful.  My joy just has a bittersweet companion, and I’m not sure when that will change.  Maybe it won’t.

For now, I’m trying to be healthy and meditate and enjoy the holiday season.  It’s going to be a bit hard seeing all of our families again because it was when we saw everyone last that we announced our first pregnancy.  I’m trying to step into my pregnancy confidently and connect with my baby.  I booked a Hypnobirthing class today.  I bought some maternity clothes.  I’m still nervous about our upcoming 20 week ultrasound in January, but I’m not letting that worry take over my life.  We are in a good place.

Thank you in advance for the well wishes.  So many of you amazing people are rooting for us and I can’t thank you enough for your kind words and positive messages over the last few months.  I promise more to follow shortly on the trials of the first trimester and our continued fertility journey.

Have a wonderful holiday season.